Both the boys and girls varsity basketball teams won the Liberty District Championship, made their respective Regional championship games, and got as far as the state quarter finals. The basketball teams produced two All-Met players this year, with boys senior guard Cameron Savage (first team All-Liberty, second team All-State) and girls sophomore forward Brianna Scott (first team All-Liberty) both receiving honorable-mention nods. Savage made social-media viral status earlier in the year by jumping over another player and making a layup.  Savage also hit the 1,000 career points mark this season and finished his high school career with 1,207 points as a Seahawk.

The boys and girls indoor track and field each won the Liberty District Championship, with the girls capturing the 6A North Region Championship.  The girls team capped off their season by finishing second overall in the State Championship. Juniors Hannah Waller (first team All-State, All-Region, All-District) and Mary Gregory (first team All-Region, All-District) were named first team All-Met and honorable mention respectively, and both were on the second team All-State 4x400m relay team, which broke the state record. At the state championships, Waller finished 2nd in the 55m dash, 3rd in the 300m dash, and 1st in the long-jump. Both athletes also received All-American honors and competed on the National Scholastic Athletics Foundation team in Reykjavik, Iceland for the Reykjavik International Games.

Finally, the swim and dive team had a successful season, finishing 5th in the Liberty District Championship, 10th in the Regional Championship and 41st in State Championship, with junior Anna Redican (All-District, All Region) receiving an All-Met honorable mention.

I recently had a chance to sit down with the athletes and have them reflect on the past season.

Q. What was your biggest accomplishment from the past season?

CS: Having [30 points] against McLean which led us to take first seed in the Liberty District.

HW: Winning the state championship in the long jump.

BS: Making it to the district and regional championship and actually making it to states.

AR: Getting 3rd place at states in the 100m backstroke.

Q: What was your favorite memory from the season?

CS: Getting on Sportscenter, that was pretty cool.

BS: Beating Herndon at home after losing to them earlier in the season.

AR: When my relay team qualified for states.

MG: The drive to and from nationals.

With Savage heading off to Barton College in the fall to continue his basketball career, the other four athletes will return to South Lakes next year and look to exceed their accomplishments in 2019/2020. 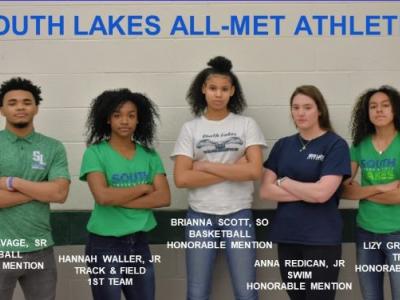